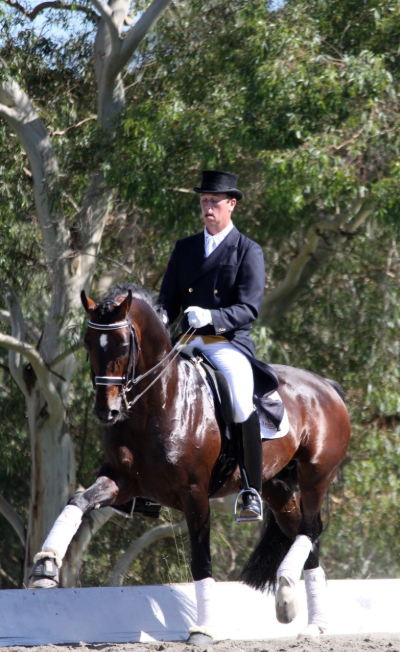 C-Dur is the mother of the licensed stallion Ashby, who stands at Klatte and also the up and coming PSI Prodigy Donneradel, a full brother to D-Dur. Close relatives include De Niro, Don Schufro, Davignon, Sir Donnerhall, Stedinger, Lady Weingard and Lord Pezi.

D'Dur has begun competing here in Australia and has set the bar high! Already he has scores in excess of 70%!

It is no accident that D-Dur is an exceptionally talented Grand Prix Dressage stallion. He's by the most dominating force in the international dressage circuit, Donnerhall and out of one of Germany's top broodmares, C-Dur by Landadel. He was the second reserve champion at his licensing in Oldenburg displaying huge lose movement along with an amazing jumping technique. "This bay stallion has a strong uphill tendency, his lift-off in trot is ideal and he develops the greatest possible impulsion. This stallion was also pleasing in a canter and in free jumping" reported the press enthusiastically.

Donnerhall's influence in the dressage arena has been cemented by his offspring. He's been represented at numerous Olympic games, World Championships, Young Horse Championships and of course the Bundeschampionat. His ability to produce collection, rideability and scope is evident through the success of his offspring.

D-Dur combines this dynamic breeding with the outstanding mother line of Landadel. Landadel is known throughout the world as being one of the great dual purpose horses. His Holsteiner heritage combines a double cross of the Thoroughbred Ladykiller with the great Holstein stallion Farnese. Landadel has produced a vast number of International showjumpers and dressage horses. 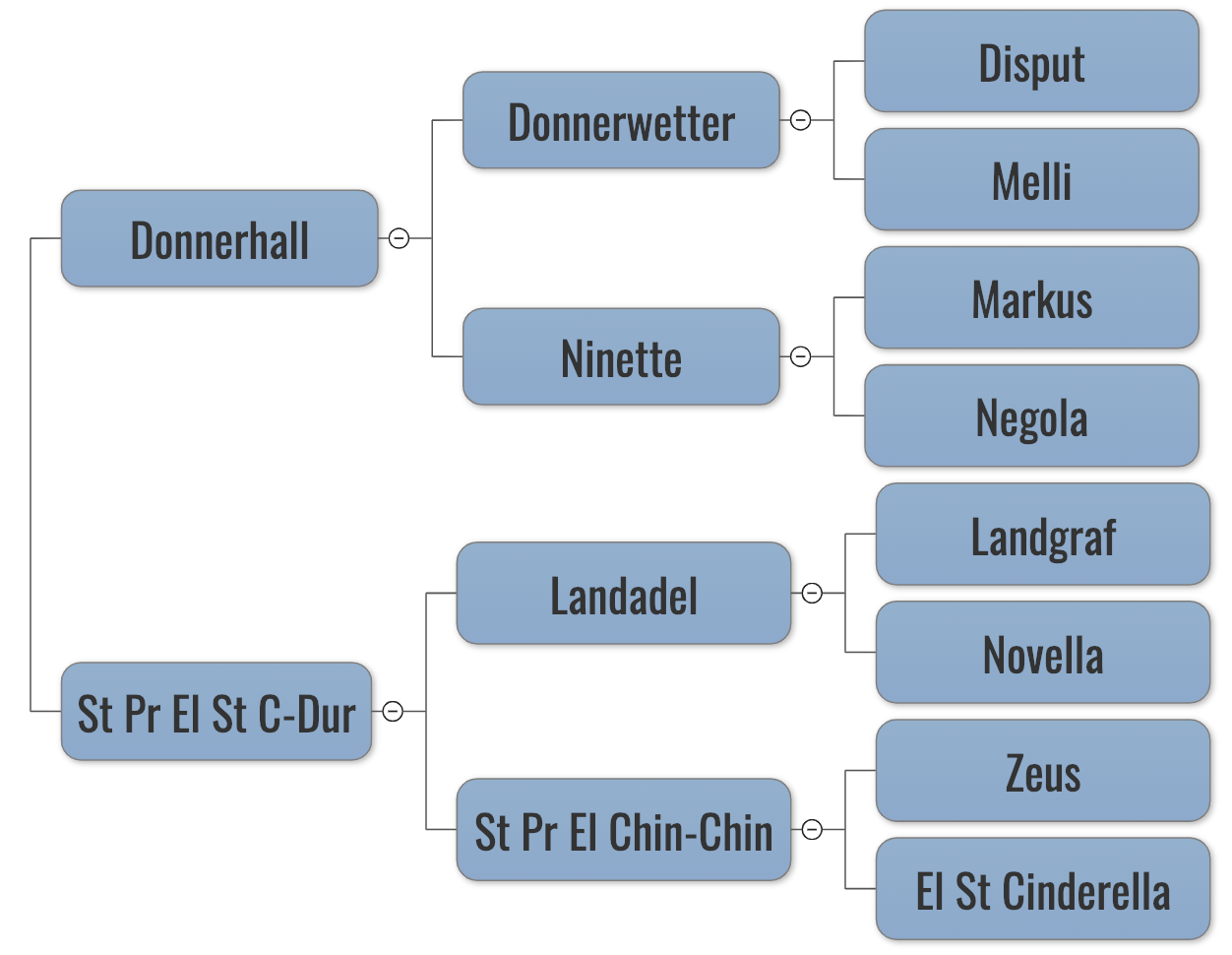 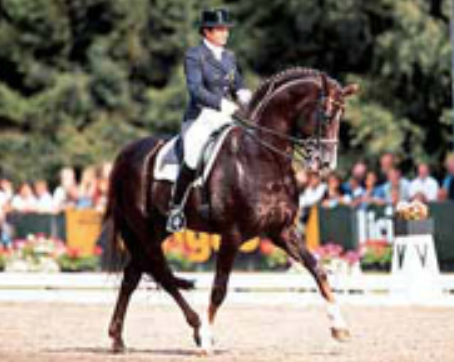 For years now Donnerhall has been at the very top of the FN (German) breeding value rating for dressage. His latest highlight was in 1998 where he presented the most expensive foal of all the breed association auctions: Deinhard was sold to The Netherlands for DM 155,000 (£54,500) at the Vechta foal auction.

Donnerhall is the most successful dressage horse in the world and looks back on an exemplary career. He managed like no other sire of his generation to combine success in breeding and in sport alike. In 1986 Donnerhall was the German DLG Champion in Hanover. After many wins in Grand Prix, Grand Prix Special and freestyle classes at International level he became German champion in Mannheim with his constant rider Karin Rehbein in 1994, team world champion and individual bronze medal winner in The Hague. This was followed by another climax in 1997: Team gold and individual bronze at the European Dressage Championships in Verden. In 1998 he was once more included in the German world championship team and with Karin Rehbein was a member of the gold medal team in Rome, where he attained fourth place in the individual results. Donnerhall won the World Cup European League, as well as being the Oldenburg dressage stallion of the year in 1997 and 1998 respectively.

It is nearly impossible to provide a complete survey of Donnerhall’s breeding record here, as it would necessitate the writing of a separate book! In Germany alone he has produced over 50 approved stallion sons and more than 35 State Premium Mares. His son Davignon I was the Federal Riding Horse Champion of 1992. His daughter Primavera was the champion mare of the Oldenburg elite mare show in 1992 and in the same year she was champion riding horse and also third in the federal championships. His daughter Hallo won the elite mare show in Rastede in 1994. Deutsche Einheit was second in the Federal Championships in Verden in 1992 and in the same year she was top-priced lot of all the German Breed Societies auctions reaching DM420,000 (£147,000). Her full brother Duntroon was vice-champion stallion of the Oldenburg approvals in 1993 and in 1994 he won the stallion performance test in Adelheidsdorf. Another top-priced lot of the Vechta sales was the approved stallion Donnerschwee.

Right from the start, Landadel was something special. He was champion of his 100 day test at Medingen in 1985. Landadel is one of those rarest of creatures - a stallion who is siring top dressage as well as jumping progeny. Indeed at the 2001 World Cups, Landadel was unique in producing representatives in both the dressage and jumping finals, with the exquisite Leondardo da Vinci in the dressage with Gonnelien Rothenberger, and, in the jumping, Helena Weinberg's Little Gun. In the 1999/2000 WBFSH standings, Landadel had 14 representatives on the jumping list and three on the dressage. Landadel is regarded as the most important son of Landgraf - and carries a double cross of the great Ladykiller, and bears out the theory that Landgraf worked best with mares with a high proportion of Thoroughbred blood. Landlord 4 and Lausbub 148 were out of mares by Tin Rocco xx.

Lanciano is out of a mare by Marlon xx and Lucky Luke is out of a mare by Fra Diavalo (by Frivol xx). Landadel's grand-dam is 3/4 Thoroughbred (Ladykiller xx / Gauner xx).His dams sire, Farnese was famed for this extravagent trot, and was used as a demonstration stallion by the Holsteiner Verband - besides the movement, the line was noted for its great substance and good conformation. Farnese's son Farmer was on the 1984 German Olympic showjumping team with Franke Sloothaak. 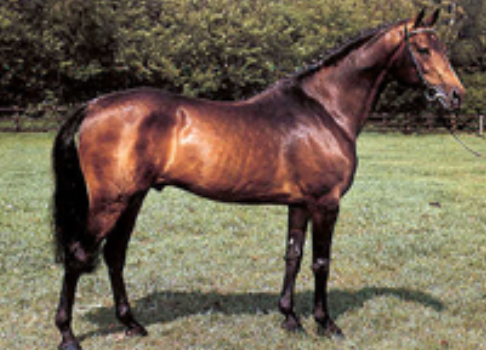 Perhaps his most famous performer has been the mare, Lady Weingard, who was ridden in her career
by Markus Beerbaum.

In Australia, Landadel is represented by the mare, Luna Luna who has been extremely successful at world cup qualifier level, with Vicki Roycroft and was sold back to Europe after representing Australia at the WEG in Jerez.

C-Dur's breeder Paul Wendolin says this of the mare "C-Dur was a late developer. At the Elite Broodmare Show she 'only' received State Premium because she was simply missing the necessary composure in the walking ring. At first we thought she should have a career in sport but when she was six-years old, her big hour came in Warendorf.

In the final round in a trot, she knocked the lights out for which she received thunderous applause from the spectators. And she also made points for her walk. She took off on the honor round with the sash for the best mare in Germany around her neck. What an achievement! When we got back home we put on a big party in our indoor to celebrate her victory."

St.Pr./El.St. C-Dur took the Oldenburg I-b Future Prize in 1994 and in 1995 she was awarded a State Premium at the Oldenburg Elite Broodmare Show in Rastede. The following year she received the I-c Prize at the Schau der Besten in Oldenburg. In 1998 at the 6th National Broodmare Show in Warendorf she left all of her national competitors in the dust, becoming the undisputed overall Champion in the class for five-year and older mares. The press highly praised her sportiness, dynamics, suppleness and convincing movements. This bay mare produced four licensed sons- Ashby (Argentinus), NN (De Kooning), Donneradel (Donnerhall) & D-Dur (Donnerhall).

Dam of the National Champion Mare, C’Dur, Chin-Chin was one of the year's best mares in the Brillantring at the Oldenburg Elite Broodmare Show in Rastede's Schlosspark in 1990 where she received the I-I Premium. She produced twelve foals, including the National Champion Mare C-Dur, St.Pr./El.St. Caruge and the licensed stallion, Laphroaig. Later, after she had been sold to the Danish Gestüt Blue Hors, she gave birth to St.Pr.St. Celine (by Don Schufro).

Paul Wendeln comments- "Chin-Chin was a very good looking mare with strong movements but she also inherited Zeus' maddening tendency to stare at things. Breeding her to Landadel was the result of a long thinking process because in the beginning I wasn't that convinced about the stallion even though everyone else was crazy about him. But he hit the bull's eye, first with the licensed Laphroig, then C-Dur and finally Caruge.“